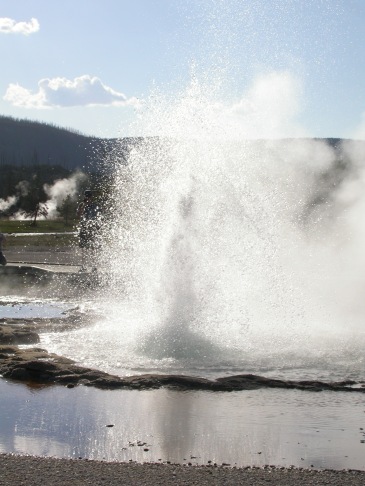 “Whew, it’s hot out there!” We’ve been hearing that phrase a lot lately as the thermometer keeps rising. Many areas have seen record breaking heat waves in the past while. It has meant that we are keeping our blinds drawn and our water bottles full.

I’ve never been a heat-loving person. I was raised in northern Ontario (no, I don’t mean one hour north of Toronto, I mean at the meeting point of two of the biggest Great Lakes, Huron and Superior). Then I moved to the Yukon, just a short distance from the Arctic Circle. When it was suggested that we pick Papua New Guinea as our destination during my husband’s sabbatical year, I wrinkled my nose. That’s tropical, isn’t it? No, no, no. I don’t like heat.

But God has a way of getting us to where He can work with us, so we began making the necessary preparations to leave for PNG. One of those items was a visit to the mission’s doctor to begin the series of inoculations we would need before leaving. He was a chatty fellow and asked how I was feeling about this idea. I admitted I was worried about the heat. “I get head aches,” I told him.

He shook his head. “You Canadians! You just don’t drink enough!”

“Water,” he said. “Drink enough water and you won’t get headaches.”

Could it really be that easy, I wondered? It didn’t take long to discover how correct that doctor had been. As long as we drank enough water we were able to tolerate the heat reasonably well.

That memory made me think of a wonderful story in the Bible about the necessity of drinking water – the kind of water that leads to eternal life. The story is in the book of John, chapter 4. Jesus had been travelling and stopped to rest by a well. When a woman came to draw water, He asked her for a drink. The woman was startled for two reasons – she was a woman and she was a Samaritan woman. Both would ordinarily prevent a Jewish man from even acknowledging her existence, let alone speaking to her.

Intrigued, the woman wanted to know more but Jesus had more to teach her. He revealed His true identity to her and within minutes she not only had a new purpose, but her life was changed forever as was the lives of many in her village because of her testimony.

Living water – the teachings of Jesus are indeed a “fountain of water springing up into everlasting life.” And we have access to that living water any time we want it.

Yes. It really is that easy.