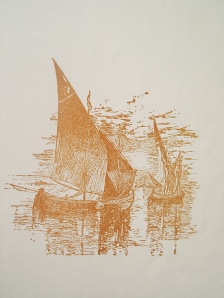 We are all dreamers. We dream of the future – where we might live or travel to, of times with our children or grand-children, perhaps even of accolades and awards. Sometimes it feels like our dreams are close to coming true. But sometimes our dreams are crushed. Our life looks like nothing but a pile of pointless efforts. Sometimes all the sacrifices seem to have been for nothing and we come close to giving up on all the dreams.

I think that was the state the disciples were in, when Jesus was crucified. The hardest day in their lives was probably the day before the resurrection – that very long day when they were in hiding, fearing that they too might end up on a cross.

Imagine the dreams the disciples had – dreams perhaps of the glory and acclaim they would have as his disciples when they came into their own in his new kingdom. It was an earthly kingdom they were dreaming of, that did not include the brutal rule of the Romans.

Imagine what they’d sacrificed – they’d left their homes, families, their livelihoods – the fishing nets that supplied their food; in Matthew’s case, the money collection stall that made him wealthy; in Luke’s case, a fulfilling and lucrative medical practice. They’d allowed Jesus to turn their lives upside down. And now what? He was gone and it looked like it had all been for nothing.

No wonder Peter said, “I’m going fishing” (John 21:1). He’d given up on the dreams. He didn’t know what to do with himself, so he went back to what he knew – casting his nets, and he took some of the other disciples with him.

But look at what happened – in the last part of vs. 3 of John 21 it says, “but that night they caught nothing.” Then, early in the morning, when they were heading back to shore empty handed, a man calls out to them – “friends, haven’t you caught any fish?”

Imagine the tone of their voices when they say no. But the stranger tells them to throw their nets on the right side of their boat. And you know what happened. The nets were so full they couldn’t haul them in and then they recognize Jesus.

I love this next part. Jesus has made a fire and is cooking fish. When the disciples arrive, he says, “Bring some of the fish you have caught.” I can just imagine their bewilderment as they struggled to understand what Jesus was trying to teach them.

I think he was trying to tell them that he had more for them to do than just catching fish, more for them to be concerned about than just making a living. He was telling them He would provide for them. The story wasn’t over. In fact, it was just beginning.

Noted author and counsellor, Larry Crabb wrote – “God is always working to make His children aware of a dream that remains alive beneath the rubble of every shattered dream, a new dream that when realized will release a new song, sung with tears, till God wipes them away and we sing with nothing but joy in our hearts.”

Yes, sometimes our dreams can look like their dead, but lift up your head. Jesus is there, with a better plan.

Sign Up to receive the Spur by email – http://eepurl.com/BOkO1

4 thoughts on “Of Fish and Crushed Dreams”