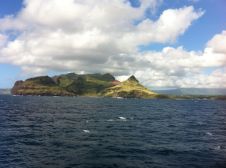 I have just returned from a 16 day trip across the Pacific Ocean. Being on open water for that long eventually gives you good sea legs but when you return you find you also have an inner ear that seems to insist that you are still bobbing and rolling along days after you have arrived on dry land.

Returning home also comes with the disorienting feeling that you’ve been away for months instead of days, while the “catching up” adds to the feeling that you really didn’t go anywhere at all. Somewhere in between all of that are the memories.

o you, images of tropical jungles and a variety of plant life that is stunning, smells that put you right back in the spot where you bent to sniff that flower, and sounds that make you stop and listen for those brightly coloured birds. Then you realize all of it is now far away and remains only in your mind. But the colours remain vibrant, the sounds crisp and clear.

And then there are the people – the woman you met who is likely making her last voyage on this earth; the tiny lady with exuberant energy who always wore a hat; the woman from India who remembered your name even though she had only met you once over a week ago; the American who kept bumping into you and saying, “oh yeah, you’re the writer;” and the girl from Indonesia whose smile lit up the whole room.

All of it a

dds up to an experience that changes you, a space of time that shifts your attitudes and makes you thankful for the life you lead and all that’s in it. I saw fish I could never have imagined existed and the largest Banyan tree in the world that spreads its roots and branches over an entire city block. I felt the steam of a volcano and the rough texture of the land its eruptions create. I laughed at jokes that really only make sense in another language and tried to twist my tongue to make those unfamiliar sounds.

Oh yes, there were a number of “first world problems” – internet access was almost non-existent, the living space was a little cramped and sometimes the coffee wasn’t really hot. But life was made more broad, enriched; opinions were challenged and sensations stimulated.

In short, I joined the ranks of the privileged and traveled. And I am thankful.

“Great are the works of the Lord; they are pondered by all who delight in them” (Psalm 111:2).

One thought on “Travel and What it Does to You”