Chaos reigned supreme. That’s how it seemed as we rehearsed our Christmas play. The first rehearsal didn’t really happen. The second one was only a bit better, and three quarters of the cast didn’t make it to the third. Those of us who were supposedly “in control” wondered if we were going to have a play at all.

That was nothing new. Every year it seems to happen. Kids run helter-skelter, some don’t show up, some can’t find costumes or those made for them don’t fit. The choir director is tearing her hair out This year seemed a bit more chaotic than usual. But somehow it all came together in the end. The night of the performance seemed to go well. I say seemed, because I was too busy trying to keep my “cast” quiet and focused, to notice if the play was working. One of the magi discovered he could use one of the shepherd’s headbands as a slingshot to wing the beads off his crown clear across the front of the church. That delighted the kids in the front row who dashed out to pick them up. Mary couldn’t stop squirming because her costume was made of wool, and Joseph kept changing his mind about which robe fit best – right up until he walked out onto the ‘stage.’

I wasn’t sure it had really all come together until the audience stood to applaud at the end. When many congratulated us on a job well done, all I could say was, “It’s a miracle!”

And that’s the promise of Christmas – it all comes together in the end. I’m sure the followers of Jesus, watching the drama of His life and death, felt the same way we ‘directors’ did. To those who thought they were in control, it looked like chaos reigned. From the moment of His birth, He and His parents had to run from those who wanted to kill Him. As He performed miracles, religious leaders plotted against Him. Even the disciples themselves didn’t understand His message. They were disappointed that He didn’t chase the Romans out of the country; He never did set up an earthly kingdom. Then, the cross. It looked like everything they tried to accomplish was doomed to fail. But in the end …

In the end, the stone was rolled away. The baby born in a stable and crucified on a cross was raised glorified, to the glory of His Father.

And there is another promise yet to unfold. As the birth of Christ is overshadowed by the cross, which was blasted away by his resurrection, even that will be outdone by His return. One day, God has told us, “Before me every knee will bow; by me every tongue will swear. They will say of me, ‘In the Lord alone are righteousness and strength’.” (Isaiah 45:23,24)

It will be a miracle and it really will all come together in the end. 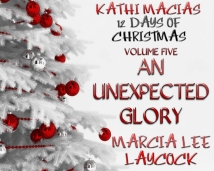 An Unexpected Glory is available on Amazon, Barnes and Noble and Kobo